The attached note included with these two featured hand woven doily mats, not only add provenance, but a measure of charm. The typewritten note states: the linen in the centerpiece was made from flax, the seed of which was planted in 1863 by John Long, who lived about 2 miles west of the village of Risingsun.

Later Mr. Long went to the Civil War with the troops that were popularly known  as the “hundred day men” and was killed by a band of guerillas in 1864.

The flax was spun by Mrs. Magdalena Sampsel, Mr. Long’s mother-in-law, when she was about 70 years old and was woven by Mrs. Sampsel’s daughter-in-law, Mrs. Mary Sampsel of Gibsonburg. The lace on the linen doily and the little towmat were crocheted by Mrs. Sarah Dunlap now 83 years old and a daughter of Mr. Long. The tow is the coarse part of the flax. 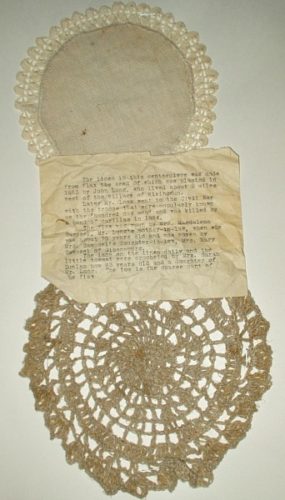